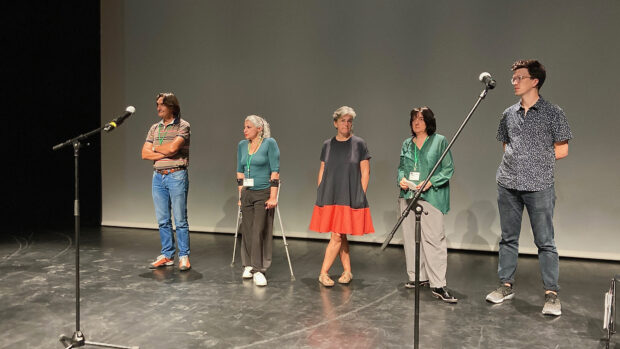 Jury members 2020 at the awarding ceremony

We very much appreciate the work and support of:

Luzia Schmid worked before her film studies as moderatress and editor for the Swiss national TV SRF. As from 2001 she works as a freelance authoress for public TV-channels and has been awarded the «Grimme-Preis» and «First Steps». Her first feature film, «Die Geschwister Vogelbach», depicts the family life of her severely disabled nephew Luca. Luzia Schmid currently works and lives with her family in Cologne.

Zineb Benkhelifa holds a degree in Oriental Studies, works for the Swiss Society of Professional Actors*Actresses, Dancers and Singers. She is also the City of Zurich’s appointee for the equal treatment of the disabled and a free lance corrector/editor.  She is furthermore volunteering as a board member of «Public Eye» (formerly «Declaration of Berne») and as a member of the und ist «International Arab Film Festival Zurich» (IAFFZ).

Pirmin Willi has been from 2004 to 2020 the director of the  «Stiftung Brändi», one of the leading organisations dedicated for the social, professional and cultural integration of the disabled. Being a film-addict with a distinct interest in culture and politics he has been amongst look&roll’s core audience for many years.